musical vision in the closest possible way.  In addition, Bradford also mixes his own albums, and only relinquishes the mastering process to another studio.  With his debut solo album, “The Ninth Ring,” Bradford proved that with modern technology, a musical vision, and a lot of hard work, one man can produce great results.  The album was well received and garnered favorable reviews among instrumental rock genre fans.  Bradford's second album "You're Doing it Wrong" was released in the summer of 2016. ​

Bradford cites as influences Vai, Satriani and others of that caliber. Clearly there is some virtuoso and technical guitar playing on You're Doing It Wrong, but I also hear some very melodic instrumental music and some Blues inspired Rock.

Bradford says that his goal was to produce an album of songs that would “sing without singing.”  Well indeed, for a number of tracks on You're Doing It Wrong, I can almost imagine there are vocals. The fact that all the songs are less than 5 minutes in lenght and feature (at least in part) nice melodic passages does give this music  ''song based'' qualities.

For sure, to really enjoy this album, it will help to be a guitar shredder music fan. Besides the guitar, Bradford plays all the other instruments with a very high level of excellence. The music is just great and the album's production is up there with the best of them. My only slight reservation is with the presence of programmed drums and drum loops (but I must admit they are very well done). Still, I can't help myself of thinking what a live drummer (for example someone of the caliber of Mike Portnoy or Gavin Harrison) could have added to this great music.

In conclusion, for those into intense (and melodic) instrumental Guitar Rock, Bradford's latest album is a ''can't miss.'' Get it. 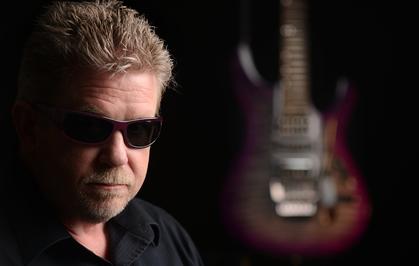 Bradford (Bradford Watson) released his second album titled You’re Doing It Wrong last summer. After listening I wish I had heard it when it came out! It’s never too late for great music, especially guitar based rock!

Brad is an Aerospace professional that got tired of the daily pressures of corporate America and decided to build his own studio. He is now a full-fledged indie musician, the total opposite of his day job. Now he has a great release valve at the end of each workday to go home to. I totally get that situation believe me.

Brad wanted to make an album that sang without the singing. That is the most wonderful thing about instrumental music, it does just that if it is good enough. I am here to tell you that this music passed my tests. I am picky and very particular when it comes to my music and there is high bar set prior to any listening experience.

If you like to rock, then you have some favorite guitar heroes, right? Let me put it like this, if you like Vai or Satriani you will love this Bradford album. As I was cruising along in music heaven, track six kicked in. ‘Flux” is a beast! The way it begins and builds to some of the heaviest Metallica (and ironically he looks like James Hetfield!) like riffs and proceeds to blow you away with nothing but volume and muscle. I loved it, period. Then like flipping a switch, the scenery travels miles away from the head banging fun. Suddenly the short outing of “Mom’s Place” comes on with its twangy notes. Short and sweet, the acoustic and electric guitar paints a different kind of picture that makes you feel like another person stepped in to take over the strings. Then the juggernaut starts all over again, kicking it into another six-string dimension with “Run Away.” From that point it never stops, there is no rest for the wicked. The music continues to roll along with unrelenting straight ahead rock albeit some different flavors and angles to keep it interesting.

You’re Doing It Wrong was two years in the making. Now keep in mind full time musicians take that long to create an album, this man did it while working a full-time job. This is a strong musical statement and Brad should be encouraged to carry on and explore his many talents.

He did it all himself which is a wonder but very possible with today’s technologies. The caveat here is you better know what you’re doing and have the chops to back it up. I can attest to the fact what a difficult process it is making an album, especially on your own, as I served as an Associate Producer for an artist that did something similar. Bradford proves that he is major league guitar player.

I don’t know who is doing it wrong here, certainly not Bradford! This is a killer instrumental rock album and I highly recommend checking out the guitar that has its own distinctive voice ala any vocals to help it along. This ride is owned and operated by Brad Wilson and one destination you will feel compelled to arrive at more than once, trust me.

Written and recorded over a period of two years, and is packed full of artful and soulful sounds, with a minimum of over-the-top “shred” guitar. This CD is a “must have” for all rock music fans that appreciate well-put together songs, regardless of their genre tastes.

Bradford has a deep passion for music.  A lifelong musician, Bradford began playing the guitar as an early teen and quickly outpaced all of his instructors.  For many years thereafter, Bradford played in numerous bands covering primarily top 40 rock, hard rock/ heavy metal, and original indie rock styles, and released three CDs.  Having tired of the demands of constantly performing by the mid ‘00s, Bradford turned his attention to composing original music and built a home studio.  In the studio, Bradford brought the rigor of scientific discipline to the recording process while maintaining the essential “Bradford” feel and style for which he is known.  Bradford’s goal was to produce an album of songs that would “sing without singing.”  In the studio, Bradford uses no other musicians, and is involved in every aspect of the production.  Drums are loop performances, or programmed, and all other instruments (bass, keyboards, and guitars) are played live.  Bradford’s close attention to detail ensures that every aspect of a song is well structured, great sounding, and reflects his

While I was in Quebec City last summer, I saw a street musician playing a table of wine glasses, each arranged to a particular pitch and also arranged on the table in such a way to make it (relatively) easy to produce melodies, harmonies, chords, and bass lines. “Easy,” of course, meaning easy if you knew what you were doing.  Denver-based guitarist Bradford certainly knows what he’s doing.  You don’t have to get very far into his first CD, “The Ninth Ring,” to appreciate that he is someone who has developed some very serious guitar skills. He can certain shred with the best of them.

But fortunately, he also has a great ear for melody, harmony and phrasing, which makes this CD a lot more interesting than most of the “hey-I’m-a-fast (very fast) -guitarist-who’s-put-together-a-CD-of-all-guitar-music” that you’ll find out there. That’s not to say that there isn’t a lot of fast shredding going on. But Bradford does a great job of making the technique serve the song and not vice versa. This especially vividly realized in “Sky Solo,” Witches Brew” and “Tonight.”The down side of the CD is that, again like most guitar guys, he uses a lot of programming and loops. Don’t get me wrong – it sounds great. I just think it would sound even better if he had people to bounce musical ideas off of rather than machines.Case in point – while all twelve tracks of “The Ninth Ring” are certainly worthwhile, my favorites are the last two: “THS” and “Legend.” Interestingly enough the first is one of Bradford’s earliest instrumentals, which, to me anyway, sounds like it was meant to be performed live, with a group of musicians. It’s a wild romp, cleverly using dazzling sweep picking and string skipping techniques over a rollicking blues / rockabilly rhythm. Guitar and bass lines soar and glide together, like jets at an air show. This is a perfect example of song and speed merging to create something absolutely stunning and wild. It’s pure fun!Likewise, “Legend” is also a lot of fun in its own way. The guitar work is spare, serving a lovely hypnotic melody (synthesized marimba?) that sweeps you along in its wake. And it’s telling that (reading the liner notes after listening) this song received a good deal of reworking, courtesy of comments from Internet listeners. Being able to create the music oneself is a gift; making use of your listeners’ reactions often makes the gift greater.Which is why, strange to say, while I like this CD a lot, I am looking forward to more from Bradford. He states in his liner notes that he considers this CD “the pinnacle of my own artistic expression up until now, both from a performance standpoint, but also from a songwriting and audio engineering standpoint.” Personally, what I hear on this disc points makes me think that there’s even better music to come. Here’s my hope that Bradford finds some musicians that he can work with to produce an organic masterpiece that will make him redefine his pinnacle.

The art of the hard rock guitar sound forms the core of The Ninth Ring from Colorado-based guitarist Bradford Watson, known to his fans as Bradford. With his electrifying guitar approach Bradford can clearly bowl you over with his immense, hard hitting instro rock sound, yet scratch the surface and you'l find that there’s something more varied and deeper going on here. What’s even more incredible is that Bradford handles all the instruments here himself, creating the aura of a complete band as played by one musician! He even did all the studio engineering as well. If there’s a progressive side to hard rock guitar instrumental performance, then Bradford has it covered. Commenting on such a sweeping and demanding one man recording project, from his detailed liner notes Bradford adds, ‘This CD represents the culmination of just over two years of effort. I consider it the pinnacle of my own artistic expression up until now, not from a performance standpoint, but also from a song writing and audio engineering standpoint.’ Although many listeners and guitar fans will place Bradford into the heavy metal rock instro category, Bradford is quick to point out, ‘While I have the utmost respect for the technical ability of many of the musicians out there doing instrumental rock, my objective has always been different. For me, it was far more important to go for good song writing. The musically well thought out instrumental rock track that sings without a vocalist is what I love about the genre. I’ve tried very hard to put the songs first.’ In the spirit of hard rock instrumental guitarists such as Steve Vai, Joe Satriani and even Rob Balducci’s latest CD on Favored Nations, Bradford lays claim to some intriguing guitar territory all his own with the CD release of The Ninth Ring. In addition to the fine music within and intense cover art graphics, Bradford gives the listener a deeper understanding of his guitar sound and vision with his in depth track by track liner notes.​